Do I need to care about their platforms?

This is a question often asked before going into certain types of training and consulting sessions. Part of this comes from a major disconnect in the workspaces others use. It only matters when brought in for some specific feature. But, also comes out when the thing needed isn’t the feature, but some kind of output the feature creates. Often, the output isn’t very unique, it’s a report or summary of what’s valuable or important. The language of getting to that output is unique to the company or team. And the platform (app, service, etc) is the semantics of how it is explained.

A friend says “convincing folks to live in the future is perhaps where you have an issue ” And they aren’t incorrect. The gap often found hearing the semantics, but running/seeing very far into the desired future - my own language a hurdle for them getting there.

Now, some would probably toss in the term “empathy” here. And maybe is needed. Maybe it’s a cop out. Consulting isn’t doing someone’s work for them, it is elevating their level of work through enabling them to discover what they couldn’t. Or, giving the enablements to unpack what was previously complex. There is some empathy at play here, but not nearly the dosage folks want to usually employ. These views into re-engineering complexity aren’t about doing what’s comfortable, it’s asking what is hardest to find comfort in — the unknown-unknown.

Perhaps, guilty of being welded to platforms and behaviors as much as critiquing. We all have our preferences, our standards. Some has been validated as the best ways forward. To ask for tips, tricks, and “more advanced things” is simply asking for those known-unknowns to be revealed. But, asking that of those outside of the context of org and behaviors seems an incorrect aligning of expectations. It would be better to get this from those inside, and then shape their messaging accordingly.

Or maybe the platforms internally prevent this. And instead of using the vulnerable terminology of “help us do something to keep us from being market-disrupted.” We instead ask for comfort in what we know by asking to push out its edges. Edges we think the platform has, but our behaviors and wants clearly indicate it doesn’t.

In a recent Metamuse podcast (episode 59), there was an insightful conversation about the shape of “canvas applications” with the maker of tldraw. Of note within this conversation, a mapping of types of applications we might be accustomed to across a 2-axis continuum: content types and types of media. What is interesting and associative to this convo of platform semantics is how some of this push-pull about caring for platforms comes of trying to move from the bottom left of this map to something more on the right side (top would be Avanceé in practice, bottom could probably fit some business expectations better). 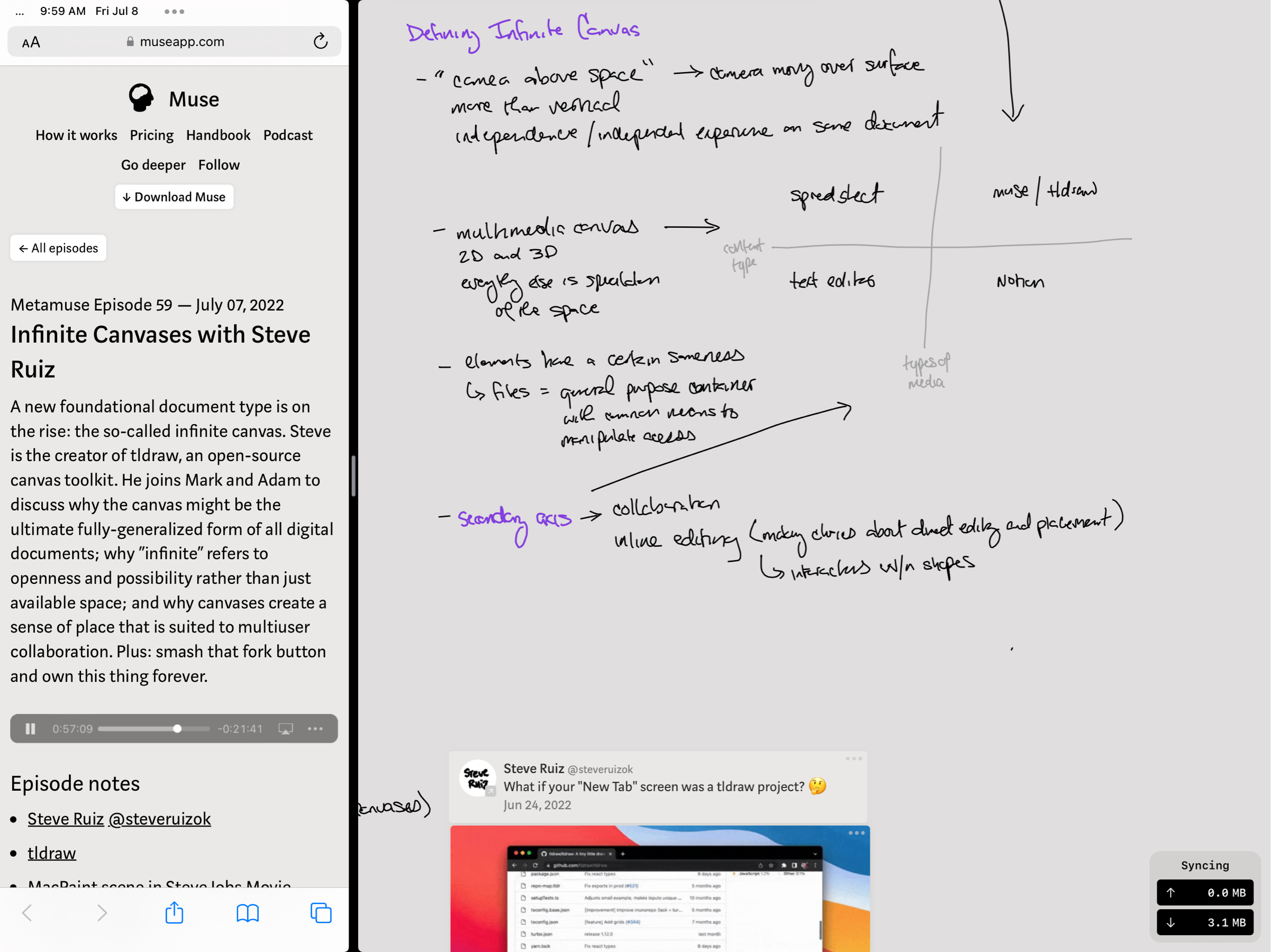 This tension between what is common versus what is useful will come up more and more as the browser and app containers become more challenged with the use of contextual, spatial, and (later) augmented/mixed reality interfaces. That tension will cause similar platform arguments. But, might (by that point) have clearer routes to solutions.