After several weeks, impressions of an open letter type 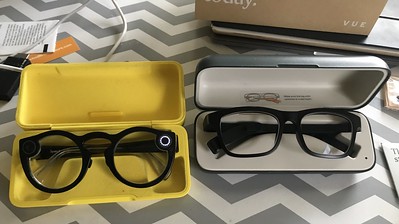 It’s been about a month since attaining the Vue glasses — a Kickstarter-funded acquisition— and so now might be a decent space and time to give a fuller impression. Previously spoke of Vue in an article titled Ear Muscles; but this would qualify as more of a review than the usual contemplative piece.

An earlier version of this piece was posted as a comment on Vue’s Kickstarter page. The intent of resharing here is to clarify a few points, adding also pieces which are better translated in this blogging format.

Overall, am pleased with Vue. Despite initial feelings of the weight, and niggles with standby battery life and UX polish, these are actually pretty decent. They point towards a better interface to computing, but also a better relationship to the world around you which isn’t digital and connected. It can almost be described as being humane tech since it empowers the wearer to not completely leave their context to enjoy aspects of connectivity.

Perhaps impressions initially were a bit more colored by wants versus reality. Bone conduction isn’t a surround sound’s compliment. It’s background more than foreground. In thinking of Vue as replacing AirPods or other headphones, expectation immediately leads to an inconsistent experience. That’s not to say that the sound umbrella the Vue glasses makes is wide and deep. It’s higher on the treble sides of the soundscape and personally feels like it misses depth in the bass and mid-tones. This could be attributed to the physics of pushing sound thru thin arms and bone. Bass and mid-tones might be better for acoustics, but also diminish the performance against bone. Understandable, yet also a wish for an EQ or “sound environment setting” (like the Nuheara buds) to improve this aspect. 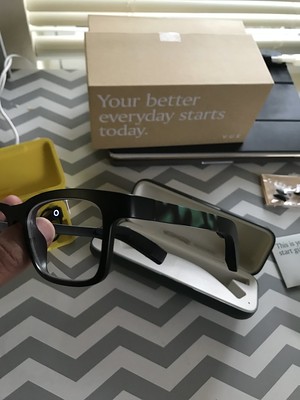 Didn’t expect the frames themselves to be as large/wide. Pardon the memory from the CES experience of trying these on, but they are and feel bigger than current frames (via GlassesUSA). Still, they are not an obvious gadget. And each mention of Vue and subsequent try on by others lands in a very positive category. Compared to (also owned and used) generation one Snap Spectacles, the Vue Kickstarter edition comes across like a normal pair of glasses with an acceptable fashion-forward framing. Of the classic and trendy styles offered, the trendy (rounded frames) might come across as better for smaller or rounder heads.

Am spoiled though by the cohesive experience of Apple, Microsoft, and other products and therefore cannot say the same about the app. The stepping stones are there, but the app is basic and has echoes of “coming soon website pages” of old. Not being able to seamlessly switch to other devices is a bugger — use is treated similar to other Bluetooth devices on iOS where the app plus pairing sequence needs to happen to each device. Would have at least liked a companion Apple Watch app, controlling or extending Vue as an accessory for it and Siri. As is the lack of integration into the Apple Health app — to leverage Siri for even just polling the Health app for relevant info would be a marked improvement over the Vue’s audible metrics (steps and calories). Perhaps some lessons from Oura (Ring) might be applicable here: conversational tone, recommendations when asked, and prompting/push messaging which respects the user (aka, a low battery notice which isn’t heard by those near because it’s so much louder than the audio which might be playing already). That kind of polish is harder to attain, but would go a long way to making the Vue a better overall platform, and these glasses a more suitable ambassador. 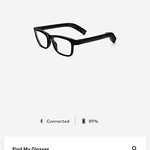 Lastly, a personal niggle: should have gotten transition lenses with these. And maybe as a matter of marketing them for those with prescription needs, it might make sense to push that option heavily. Noticing use of Vue in contexts such as an office or commuting dawn/dusk where switching glasses has to happen. Also, the need to carry a second pair of glasses because after 4-5 hours of streaming/web calls/standby, they need to be charged to finish the day. Shame there’s not an adapter to cap the back of the arm with some kind of USB-C connector. Carrying the case makes carrying the second pair of glasses doable. But, that’s because the choice in not getting transitions hits at a very specific point. Is there an easy means to swap into transitions or a different lens entirely, because eyes do change? This is a personal niggle. But, does not affect some of the overall perception noted at the start.

For those who might be looking at Vue, you might be surprised at recommending them. Bose (and soon Amazon) is quality competition, and others will come also. That Vue has shipped means that the idea is not just fundable, but it’s also possible. The electronics and physics which went into making Vue happen for a prototype is impressive. What’s been translated to production is no less impressive. As a secondary set of glasses, they would be fine. As a primary, some expectations would have to be reigned in. And depending on one’s experiences, maybe a bit more patience until some of the software bits are later addressed. 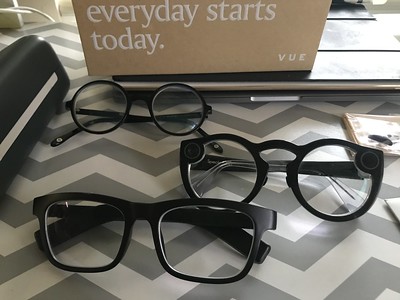 Not everyone will have a great experience however. Those with attention and hearing difficulties will love the idea of Vue, but might find other factors infringing on the possibilities. But, that’s par the course for products like these. Hopefully. Vue adds to the initial experience with updates and refinements. Hopefully competition does also. There’s something to the case of having audio interfaces closer than just the ear canals. Vue has a case for proving where that could be, if in the attention they have gotten from this, they can focus prospective purchasers to the sound scapes they might have missed.

Vue glasses are currently available via their website ($259 USD; does not include additional cost for prescription, polarized, or transition lenses). The last Kickstarter pledges are being shipped out now, so you might find a longer window for obtaining a pair than a competitors’ glasses. You might find a few folks in the comments there wanting to sell theirs, and that would be a faster means to attain Vue.